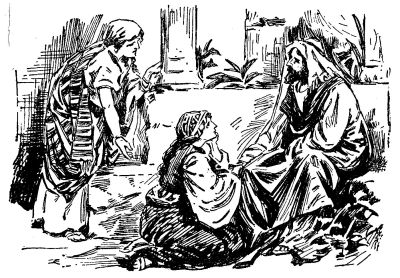 From Jericho, Jesus and his disciples went up the mountains, and came to Bethany, where his friends Martha and Mary lived, and where he had raised Lazarus to life. Many people in Jerusalem heard that Jesus was there, and they went out of the city to see him, for Bethany was only two miles from Jerusalem. Some came also to see Lazarus, whom Jesus had raised from the dead; but the rulers of the Jews said to each other:

“We must not only kill Jesus, but Lazarus, also; because on his account so many of the people are going after Jesus and are believing on him.”

The friends of Jesus in Bethany made a supper for Jesus, at the house of a man named Simon. He was called “Simon the leper”; and perhaps he was one whom Jesus had cured of leprosy. Jesus and his disciples, with Lazarus, leaned upon the couches around the table, as the guests; and Martha was one of those who waited upon them. While they were at the supper, Mary, the sister of Lazarus, came into the room, carrying a sealed jar of very precious perfume. She opened the jar, and poured some of the perfume upon the head of Jesus, and some upon his feet; and she wiped his feet with her long hair. And the whole house was filled with the fragrance of the perfume.

But one of the disciples of Jesus, Judas Iscariot, was not pleased at this. He said: “Why was such a waste of the perfume made? This might have been sold for more than forty-five dollars, and the money given to the poor!”

This he said, but not because he cared for the poor. Judas was the one who kept the bag of money for Jesus and the twelve; and he was a thief, and took away for his own use all the money that he could steal. But Jesus said:

“Let her alone; why do you find fault with the woman? She has done a good work upon me. You have the poor always with you, and whenever you wish, you can give to them. But you will have me with you only a little while. She has done what she could; for she has come to perfume my body for its burial. And truly I say to you, that wherever the gospel shall be preached throughout all the world, what this woman has done shall be told in memory of her.” 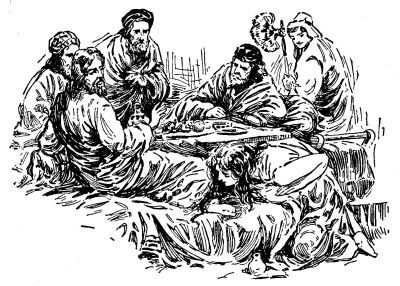 Perhaps Mary knew what others did not believe, that Jesus was soon to die; and she showed her love for him, and her sorrow for his coming death, by this rich gift. But Judas, the disciple who carried the bag, was very angry at Jesus; and from that time he was looking for a chance to betray Jesus, or to give him up to his enemies. He went to the chief priests, and said: “What will you give me, if I will put Jesus in your hands?”

They said, “We will give you thirty pieces of silver.”

And for thirty pieces of silver Judas promised to help them take Jesus, and make him their prisoner.

On the morning after the supper at Bethany, Jesus called two of his disciples, and said to them:

“Go into the next village, and at a place where two roads cross; and there you will find an ass tied, and a colt with it. Loose them, and bring them to me. And if any one says to you, ‘Why do you do this?’ say, ‘The Lord has need of them,’ and they will let them go.”

They went to the place and found the ass and the colt, and were loosing them, when the owner said:

“What are you doing, untying the ass?”

And they said, as Jesus had told them to say:

Then the owner gave them the ass and the colt for the use of Jesus. They brought them to Jesus on the Mount of Olives; and they laid some of their own clothes on the colt for a cushion, and set Jesus upon it. Then all the disciples and a very great multitude threw their garments upon the ground for Jesus to ride upon. Others cut down branches from the trees and laid them on the ground. And as Jesus rode over the mountain toward Jerusalem, many walked before him waving branches of palm trees. And they all cried together: 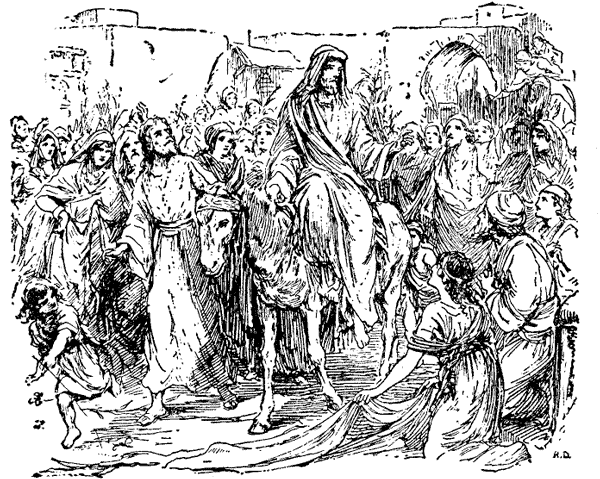 These things they said, because they believed that Jesus was the Christ, the Anointed King; and they hoped that he would now set up his throne in Jerusalem. Some of the Pharisees in the crowd, who did not believe in Jesus, said to him:

“I tell you, that if these should be still, the very stones would cry out!”

And when he came into Jerusalem with all this multitude, all the city was filled with wonder. They said: “Who is this?”

And the multitude answered:

“This is Jesus, the prophet of Nazareth in Galilee!” 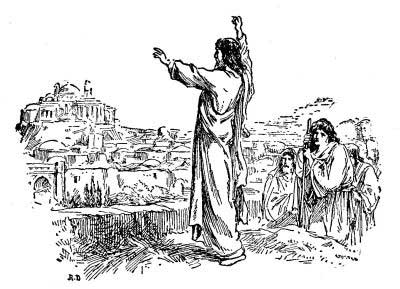 And Jesus went into the Temple, and looked around it; but he did not stay, because the hour was late. He went again to Bethany, and there stayed at night with his friends.

These things took place on Sunday, the first day of the week; and that Sunday in the year is called Palm Sunday, because of the palm branches which the people carried before Jesus.

Many people heard him gladly, but the great city was deaf to his pleadings. “O Jerusalem, Jerusalem,” he cried, “thou that killest the prophets, how often would I have gathered thy children together, even as a hen gathereth her chickens under her wings, and ye would not!”