You remember that in those times of which we are telling, when men worshipped God, they built an altar of earth or of stone, and laid an offering upon it as a gift to God. The offering was generally a sheep, or a goat, or a young oxsome animal that was used for food. Such an offering was called “a sacrifice.”

But the people who worshipped idols often did what seems to us strange and very terrible. They thought that it would please their gods if they would offer as a sacrifice the most precious living things that were their own; and they would take their own little children and kill them upon their altars as offerings to the gods of wood and stone, that were no real gods, but only images.

God wished to show Abraham and all his descendants, those who should come after him, that he was not pleased with such offerings as those of living people, killed on the altars. And God took a way to teach Abraham, so that he and his children after him would never forget it. Then at the same time he wished to see how faithful and obedient Abraham would be to his commands; how fully Abraham would trust in God, or, as we would say, how great was Abraham’s faith in God.

So God gave to Abraham a command which he did not mean to have obeyed, though this he did not tell to Abraham. He said:

“Take now your son, your only son Isaac, whom you love so greatly, and go to the land of Moriah, and there on a mountain that I will show you, offer him for a burnt-offering to me.”

Though this command filled Abraham’s heart with pain, yet he would not be as surprised to receive it as a father would in our day; for such offerings were very common among all those people in the land where Abraham lived. Abraham never for one moment doubted or disobeyed God’s word. He knew that Isaac was the child whom God had promised, and that God had promised, too, that Isaac should have children, and that those coming from Isaac should be a great nation. He did not see how God c 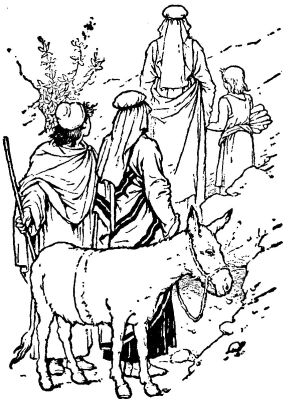 ould keep his promise with regard to Isaac, if Isaac should be killed as an offering; unless indeed God should raise him up from the dead afterward.

But Abraham undertook at once to obey. God’s command. He took two young men with him and an ass laden with wood for the fire; and he went toward the mountain in the north, Isaac, his son, walking by his side. For two days they walked, sleeping under the trees at night in the open country. And on the third day Abraham saw the mountain far away. And as they drew near to the mountain Abraham said to the young men:

“Stay here with the ass, while I go up yonder mountain with Isaac to worship; and when we have worshipped, we will come back to you.” For Abraham believed that in some way God would bring back Isaac to life. He took the wood from the ass and placed it on Isaac, and they two walked up the mountain together. As they were walking, Isaac said:

And Abraham said, “My son, God will provide himself a Lamb for a burnt offering.”

And they came to the place on the top of the mountain. There Abraham built an altar of stones and earth heaped up; and on it he placed the wood. Then he tied the hands and the feet of Isaac, and laid him on the altar, on the wood. And Abraham lifted up his hand, holding a knife to kill his son. Another moment longer and Isaac would be slain by his own father’s hand. 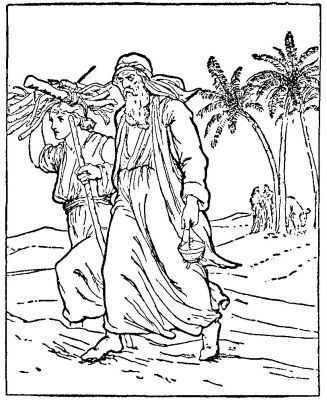 But just at that moment the angel of the Lord out of heaven called to Abraham, and said:

And Abraham answered, “Here I am, Lord.” Then the angel of the Lord said:

“Do not lay your hand upon your son. Do no harm to him. Now I know that you love God more than you love your only son, and that you are obedient to God, since you are ready to give up your son, your only son, to God.”

What a relief and a joy these words from heaven brought to the heart of Abraham! How glad he was to know that it was not God’s will for him to kill his son! Then Abraham looked around, and there in the thicket was a ram caught by his horns. And Abraham took the ram and offered him up for a burnt-offering in place of his son. So Abraham’s words came true when he said that God would provide for himself a lamb.

The place where this altar was built Abraham named Jehovah-jireh, words in the language that Abraham spoke meaning, “The Lord will provide.”

This offering, which seems so strange, did much good. It showed to Abraham, and to Isaac also, that Isaac belonged to God, for to God he had been offered; and in Isaac all those who should come from him, his descendants, had been given to God. Then it showed to Abraham and to all the people after him, that God did not wish children or men killed as offerings for worship; and while all the people around offered such sacrifices, the Israelites, who came from Abraham and from Isaac, never offered them, but offered oxen and sheep and goats instead.

These gifts, which cost so much toil, they felt must be pleasing to God, because they expressed their thankfulness to him. But they were glad to be taught that God does not desire men’s lives to be taken, but loves our living gifts of love and kindness.