Sarah was a bushy-tailed Gray Squirrel that lived in a huge oak tree in the middle of a field. Many other Squirrels lived there, too. Because the tree was so big and so full of acorns, it could feed many, many squirrels.

All of the squirrels lived fat and happy from this wonderful tree. They played all day and ate whenever they wanted to. Because the tree was ALWAYS full of acorns, they never needed to save any. Life was wonderful and they also never felt the need to wander away and explore the world. 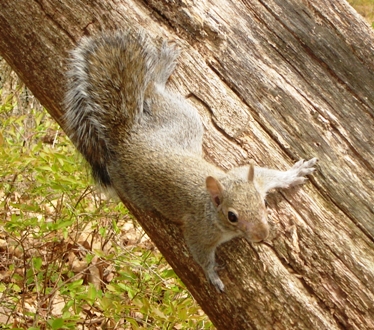 Sarah was different, though. Although she would take the time to play with the other squirrels, she often would take time to sit and think about the tree and where the acorns came from. She had heard that other squirrels didn’t have life as easy and had to work to find their food and shelter and she wondered why she and her friends were so blessed. She realized that there had to be a higher power that blessed her community.

Sarah also had a kind heart and somehow knew that she should be thankful for her life. She decided to give a gift back to whoever was the creator of the tree, and so every day she took one acorn and crossed the field, traveling far away from the tree and buried the acorn. She then said a prayer to the Creator of the tree and thanked him with this gift.

The other squirrels thought Sarah was crazy and often made fun of her. They would tease her and call her names and told her she was foolish for saving acorns when so many grew on the tree. Even though it hurt her feelings, she didn’t let their mean words stop her from being thankful and she continued to make her journey to bury a nut each day as a gift.

The squirrels lived in the luxury of the huge oak tree for many year until one day something terrible happened: a powerful lightning bolt hit the tree.

It happened during the night while the squirrels were sleeping. They woke up in the darkness from a loud “BANG” that shook the tree and knocked several squirrels to the ground. They all ran around in fear, not understanding what happened. They all huddled together in the field, frightened in the dark. It wasn’t until morning that they realized that their wonderful tree had been destroyed. It had been split down the middle by the lightning and the leaves had already begun turning brown and brittle. Their tree was dead.

“What will we do for food?” on squirrel asked.

“We have no place to live now!” another cried.

Some of the squirrels began to weep while others began to quarrel amongst themselves. One older and wiser squirrel realized their fault and exclaimed that they were all guilty of being lazy and foolish. Had they all behaved like Sarah and buried some of the nuts they would have some saved to get them through while they looked for a new home. With the mention of Sarah’s name they all remembered that she had buried nuts. They turned to her and demanded she show them where she had taken the nuts so they would have food. 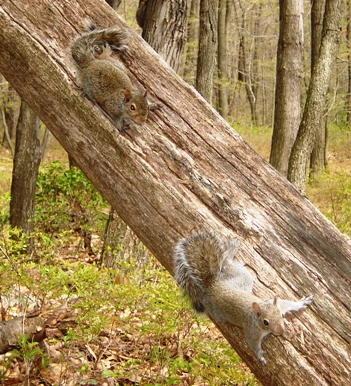 “But those nuts were a gift to the Creator of the tree. We can’t take them back,” Sarah said.

“There is no Creator. You just want to keep the acorns for yourself! Show us where they are!” they demanded.

So Sarah led the community of squirrels on the journey to what she called her “thanksgiving place.” Crossing streams by walking over fallen logs and jumping from tree to tree in the thick pine forest, they followed her on the long path that she had traveled every day.

Finally, they reach a hill where Sarah stopped and addressed the group. “Over this hill is the field where I bury all of the nuts. It’s a special place of thanksgiving that belongs to the Creator. Before we climb over the hill. I want this group to promise me something.”

Sarah continued, “We all learned today that it’s foolish to be lazy and think that we can live for free. Every thing we have is a gift from the Creator and we shouldn’t take it for granted. I want you to promise that from now on, no matter how good life seems, we will all be thankful every day and give something back as a gift for what we receive.”

All of the squirrels felt ashamed and apologized to Sarah for being so mean to her. They admitted that she worked hard every day carrying nuts over that long, difficult journey, and that she alone may have saved their community. One squirrel humbly stepped forward and ask, “Sarah, I now know you were not the foolish one, but how do you know that their is a Creator?”

Sarah answered, “I knew it in my heart first, but it was proven to me when I started giving thanks. Each time I brought an acorn here I noticed something magical was happening. The Creator took my gift and used it to create something wonderful. Now, I think the Creator is giving that gift back to all of us. Come with me and I believe you’ll understand.”

Now feeling a reverence for the place they were to enter, the squirrels climbed the hill. Reaching the top – they couldn’t believe their eyes!

Sarah’s special “thanksgiving place” was no longer a field. Each acorn she had buried had sprouted and grown, and the field was now a huge oak forest where many animals now lived. Not only squirrels, but also birds, deer and rabbits lived there. The forest was full of life, and because the forest was so abundant with trees and acorns, there was plenty of room for all of the squirrels to live.

The squirrels never forgot Sarah’s lesson and gave thanks every day by burying nuts. Generation after generation they taught their children to be thankful and carry on the tradition. That tradition is still carried on by squirrels today.

When you see a squirrel carrying a nut, it is on a journey of thanksgiving and we should remember to be thankful, too. Even though we don’t need to bury nuts, we can be thankful by sharing what we have with others, just like Sarah did. We can be thankful, too, by helping someone else who is in need, without asking for anything in return. By helping and giving to each other, we are giving a gift of thankfulness to our Creator.