At the time when the story of the New Testament begins, the land of Israel, called also the land of Judea, was ruled by a king named Herod. He was the first of several Herods, who at different times ruled either the whole of the land, or parts of it. But Herod was not the highest ruler. Many years before this time, the Romans, who came from the city of Rome in Italy, had won all the lands around the Great Sea, the sea which we call the Mediterranean; and above king Herod of Judea was the great king of Rome, ruling over all the lands, and over the land of Judea among them. So Herod, though king of Judea, obeyed his overlord, the emperor at Rome. At the time when this story begins, the emperor at Rome was named Augustus Cæsar.

At this time, the land where the Jews lived was full of people. Jerusalem was its largest city, and in Jerusalem was standing the Temple of the Lord, which king Herod had lately built anew, taking the place of the old Temple built very many years before, which had long needed repair. There were also many other large cities besides Jerusalem. In the south was Hebron among the mountains; on the shore of the Great Sea were Gaza, and Joppa, and Cæsarea; in the middle of the land were Shechem and Samaria; and in the north were Nazareth, and Cana; down by the shore of the Sea of Galilee were Tiberias, and Capernaum, and Bethsaida. Far up in the north, at the foot of snowy Mount Hermon, was another Cæsarea; but so that it might not be confused with Cæsarea upon the seacoast this city was called Cæsarea-Philippi, or “Philip’s Cæsarea,” from the name of one of Herod’s sons.

One day, an old priest named Zacharias was lead 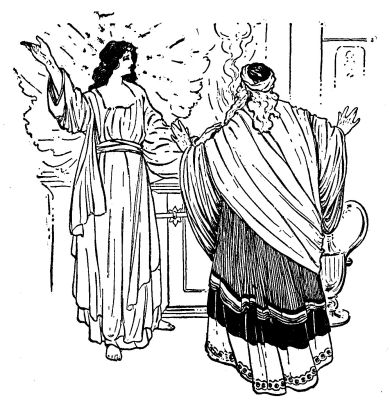 ing the service of worship in the Temple. He was standing in front of the golden altar of incense, in the Holy Place, and was holding in his hand a censer, or cup, full of burning coals and incense; while all the people were worshipping in the court of the Temple, outside the court of the Priests, where the great altar of burnt-offering stood.

Suddenly, Zacharias saw an angel from the Lord, standing on the right side of the altar of incense. He felt a great fear when he saw this strange being with shining face; but the angel said to him:

“Do not be afraid, Zacharias; for I have come from the Lord to bring good news. Your wife Elizabeth shall have a son, and you shall name him John. You shall be made glad, for your son John shall bring joy and gladness to many. He shall be great in the sight of the Lord; and he shall never taste wine nor strong drink as long as he lives; but he shall be filled with God’s Holy Spirit. He shall lead many of the people of Israel to the Lord, for he shall go before the Lord in the power of Elijah the prophet, as was promised by Malachi, the last of the old prophets. He shall turn the hearts of the fathers to the children, and those who are disobeying the Lord to do his will.”

As Zacharias heard these words, he was filled with wonder, and could hardly believe them true. He was now an old man, and his wife Elizabeth was also old; so that they could not expect to have a child. He said to the angel:

“How shall I know that your words are true, for I am an old man, and my wife is old?”

“I am Gabriel, who stands in the presence of God,” said the angel. “And I was sent from the Lord to speak to you, and to bring you this good news. But because you did not believe my words, you shall become dumb, and shall not be able to speak, until this which I have said comes to pass.”

All this time the people outside in the court were wondering why the priest stayed so long in the Temple. When at last he came out, they found that he could not speak a word; but he made signs to them, to tell them that he had seen a vision in the Temple.

After the days of his service were over, Zacharias went to his own home, which was near Hebron, a city of the priests, among the mountains in the south of Judea. When his wife Elizabeth found that God was soon to give her a child, she was very happy, and praised the Lord.

About six months after Zacharias saw the vision in the Temple, the same angel Gabriel was sent from the Lord to a city in the part of the land called Galilee, which was in the north. The city to which the angel was sent was Nazareth. There the angel found a young girl named Mary, who was a cousin to Elizabeth. Mary was soon to be married to a good man who had sprung from the line of king David, though he was not himself a king, nor a rich man. He was a carpenter, living in Nazareth, and his name was Joseph. The angel came into the room where Mary was, and said to her: “Hail, woman favored by the Lord; the Lord is with you!”

Mary was surprised at the angel’s words, and wondered what they could mean. Then the angel spoke again, and said: “Do not be afraid, Mary. The Lord has given to you his favor, and has chosen you to be the mother of a son whose name shall be Jesus, which means ‘salvation,’ because he shall save his people from their sins. He shall be great, and shall be called the Son of God; and the Lord shall give to him the throne of his father David. He shall be a king, and shall reign over the people of God forever; and of his kingdom there shall be no end.”

But Mary could not see how all this was to come to pass. And the angel said to her:

“The Holy Spirit shall come upon you, and the power of the Most High God shall be over you; and the child which you shall have shall be called holy, the Son of God.”

Then the angel told Mary that her cousin Elizabeth was soon to have a child, through the power of the Lord. And when Mary heard all this, she said: “I am the servant of the Lord, to do his will. Let it be to me as you have said.”

When the angel had given his message and had gone away, Mary rose up in haste and made a journey to the home of Zacharias and Elizabeth. When Elizabeth saw Mary, she was filled with the Spirit of the Lord, and said:

“Blessed are you among women, and blessed among men shall be your son! And why is it that the mother of my Lord comes to visit me? Blessed is the woman who believed that the promise of the Lord to her shall be made true!”

Then Mary was filled with the Spirit of the Lord, and broke out into a song of praise. She stayed with Elizabeth for nearly three months, and then went again to her own home at Nazareth.

As the angel had said, to the aged woman Elizabeth was given a son. They were going to name him Zacharias, after his father. But his mother said: “No, his name shall be John.”

“Why,” they said, “none of your family have ever been named John!”

They asked his father Zacharias, by signs, what name he wished to be given to the child. He asked for something to write upon; and when they brought it, he wrote, “His name is John.” Then all at once, the power to hear and to speak came back to Zacharias. He spoke, praising and blessing God; and he sang a song of thanks to God, in which he said:

“You O child, shall be called a prophet of the Most High; to go before the Lord, and to make ready his ways.”

When John was growing up, they sent him out into the desert on the south of the land, and there he stayed until the time came for him to preach to the people; for this child became the great prophet John the Baptist.